A hot time, in more ways than one!

Here are a few photo galleries from Reunion 2010:

Friday a small but hearty band of golfers braved the searing heat of the Drought of 2010 in South Central Pennsylvania. They played 18 holes at Greencastle Greens. In spite of the heat, they had a great time. Meantime, several of the committee were toiling away in their gardens, picking flowers, and then gathering at the Country Club to create the beautiful arrangements that would be used to decorate the ballroom on Saturday night.

Friday evening, the weekend officially kicked off with an informal social at the Rolling Mill Restaurant (formerly the Varsity). With about 90 in attendance, the air conditioning struggled to keep up. However, when 40 years melt away, you’ve got to expect to work up a sweat. And, everyone in attendance felt as if they picked up where they left off in 1970.

Each person attending was given a “chip” — a poker chip personalized for the event, and it was good for a drink that evening. After the bar tab was paid by the committee, the chips were then given back to each person as a memento of the reunion. There were snacks available all evening, and many people decided to order from the menu.

Saturday afternoon, an even hotter time, a larger group of golfers descended upon the beautiful course at the Country Club. A few actually played a round in the morning, and then again with the group. Jeff Yentsch had organized both golf outings, and for that the committee is extremely grateful. Also, Mike McKee once again supplied a great “goodie bag” of golf related items, including balls and a towel personalized for the event.

Saturday night, it was time for the big event — the 40 Year Reunion Dinner / Dance. While in the beautiful setting of the Waynesboro Country Club, it was still a very casual event. As always with our class, it involved a lot of hugging, laughing, crying, and so much conversation it was hard to believe there was music playing in the background, supplied by the Dee Jay from Musicscape Productions. There was a delicious crab dip appetizer available during the happy hour (from 6:00-7:00pm).

On a table, just inside the ballroom, was a poster-sized version of our “In Memory Of ” page, listing all of our deceased classmates, many with pictures from the yearbook. At 6:45, Steve Sheldon opened the evening with a prayer, and then the class members assembled out back of the club for a group photo (see below) — another hot time, being forced back into the heat of the night, but it went quickly. Before, starting our attack on the wonderful dinner buffet, Linda (Good) Fischer offered up a prayer of reflection and hope.

The food was delicious, by all accounts, and there was plenty of it. From the salad bar to the dessert table, there was something that everyone could enjoy. The crab dip remained available throughout the evening for snacking later on. After dinner, a report of the finances of the class was given. With generous donations this year, and a good response to purchases, the committee was able to put on all the events and come out about $500 ahead of when they started. This included last minute purchases made over the course of Friday and Saturday.

Then, came the event that many of us had been waiting for: Cindy (Burger) Knauer and Stan Beard performing two songs, with Stan accompanying on the grand piano. Their performance was as professional as anything you will ever see, and the touching songs selected, left few dry eyes in the room. Friends, and friendships sustained over 40 years was a hot topic all weekend, and the performance just emphasized those feelings.

Trivia questions about people and places from our high school days were presented to each table, by the Dee Jay. Winners were awarded the flower arrangement centerpiece from their tables. One of the golf goodie bags was raffled off, another was awarded to Ginger (Waltz) Fitzpatrick for the first reservation, and another randomly awarded to an attendee — Betty (Haines) Richey. The remainder of the evening was spent dancing the night away, along with lots of conversation, laughing, and hugging – all very typical for our class.

The weekend events concluded on Sunday, with 24 people gathering at the Mountain Gate Restaurant for a breakfast buffet. The leisurely morning meal was just one more opportunity to visit with great friends, and some members of their families. Most of those people then headed to the high school, where they were joined by more classmates and family, to take a tour of the school. Our tour guide was Chris Dennis, the current high school principal. He graduated from Waynesboro in 1990 — Did we feel old?? You think!

But, what was particularly nice was that his class had been there during the previous renovation 20 years ago. Then, he’s been there as an administrator during the most recent renovation. All along the tour he could relate exactly where we were standing — in our world of 1970 — versus what that space is used for today.

The newest renovation has made the school not only a showcase, but a truly efficient and functional place of learning. In appreciation for the tour, a small donation will be made to the school’s student council fund, by the Class of 1970.

Reluctantly, after the tour, many of us said goodbye to friends we will not see again for several years. All weekend, we talked of having something in 2012 to celebrate our collective birthday for turning the big “Six Oh”. Many are interested in doing a dinner cruise in Baltimore’s Inner Harbor. We will work on getting something planned. If we do not see you then, we hope to see you at the 45 Year Reunion in 2015.

The Reunion Committee would like to thank everyone who helped with events, and everyone who attended them – you are truly what make the reunions so special.

Here is the group photo from Saturday Night at the Waynesboro Country Club: 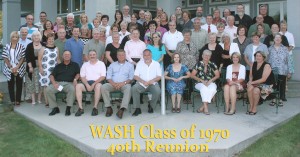